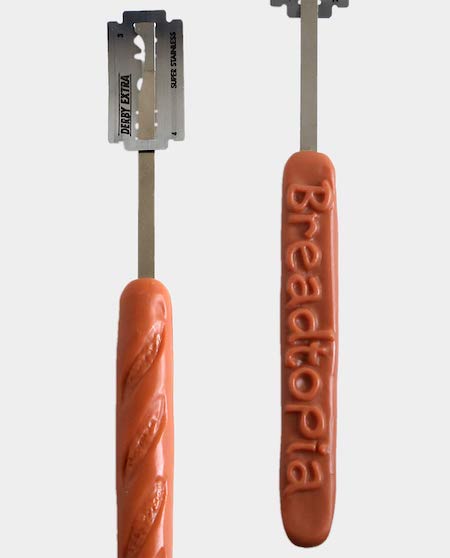 About: A Lame (pronounced LAHM, meaning “blade” in French) is typically a long thin stick made to hold a metal razor used to cut, or score, bread dough to help control the expansion of the loaf as it bakes.

Breadtopia had not carried a bread lame prior to this one because they were unable to find one that they liked. The ones they had found were either over priced or disposable. To work well, the blade needs to be extremely sharp, so a replaceable blade was a necessary feature of an acceptable lame. So they made their own!

They believe their bread lame is an excellent balance of form, function and price. It’s designed to be easy to see and pick up. This may sound funny, but one popular model on the market is so small and thin as to be nearly invisible when set down, is difficult to pick up barehanded and almost impossible to use while wearing protective oven gloves. Breadtopia's lame’s easy grip handle allows for steady control and accurate cutting. It uses inexpensive replaceable double edge blades  which makes it both economical and ecological. Since you’re only cutting with one corner of the blade at a time and the blade can easily be rotated, you get maximum life out of each blade!

The handle is made of hard plastic resin with a stainless steel strip to hold the razor blade. Included with the lame are 5 razor blades.

Use the box that the lame comes in as a convenient and safe way to store it. Keep out of reach of children.

Made in United States

4 available
Add to Cart
Statements on this site have not been evaluated and/or approved by the FDA.  Statements & products are not intended to diagnose, treat, cure or prevent any disease.
111 E Cedar Ave
Suite 5
Gladwin, MI 48624
989.256.3111